Markets Struggle in the Third Quarter

Global equity markets had a mixed third quarter, but when the final Wall Street-bell chimed on September 30th, global markets had not moved very much, despite the final month of the quarter turning in dismal results.

But many are trying not to focus on the mixed returns for 3Q (and dismal September returns) and are instead focusing on how the market performed for the first nine months of the year – and those numbers are solid, as:

Interestingly, the themes that helped drive market performance have been on Wall Street’s worry list for a while and did not just appear on July 1st. Topping the worry list was rising inflation, the Federal Reserve’s schedule of remaining accommodative; declining consumer sentiment; overheating housing; concerns that the delta variant might stall economic activity; and disappointing economic data hampered by supply chain issues.

Further, we saw that: 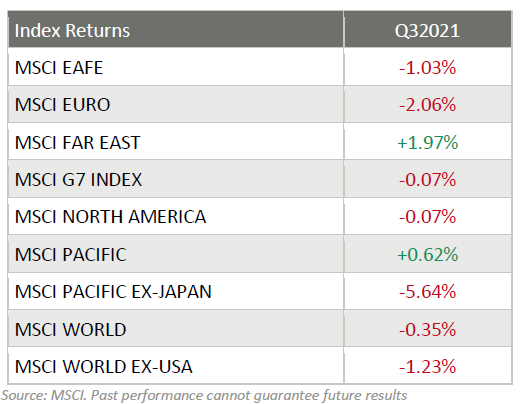 Again, the themes that helped drive market performance this month have been on Wall Street’s worry list for a long time and did not magically appear when the third quarter kicked off.

In fact, the worries of rising inflation; the Federal Reserve’s schedule of remaining accommodative; declining consumer sentiment; overheating housing; the delta variant; and supply chain issues have all been around for many months (inflation has gone up every month in 2021, for example).

But the third quarter did see a few more troublesome topics added to that long worry list, including:

And as if we need another reminder about inflation, the number of companies warning of inflation on their latest earnings calls hit an all-time high too. 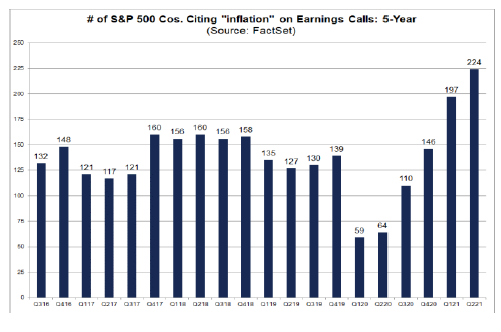 September Lived Up to Its Billing

Further, the S&P 500 and NASDAQ both turned in their worst months since the height of the pandemic in March 2020.

The IPO market was on fire during the third quarter, with a stunning record amount of activity on the M&A and IPO front. Here are some statistics for perspective:

The overall trend for sector performance for each of the first nine months and the first, second and third quarters was good, but the performance leaders and laggards did rotate throughout, suggesting that a few sector rotations may have occurred in just 9 months.

For perspective, recall that this time last year, the third quarter of 2020 ended with 10 of the 11 S&P 500 sectors painted green. Fast forward a year later and 5 of the 11 are painted red.

Here are the sector returns for the shorter time periods: 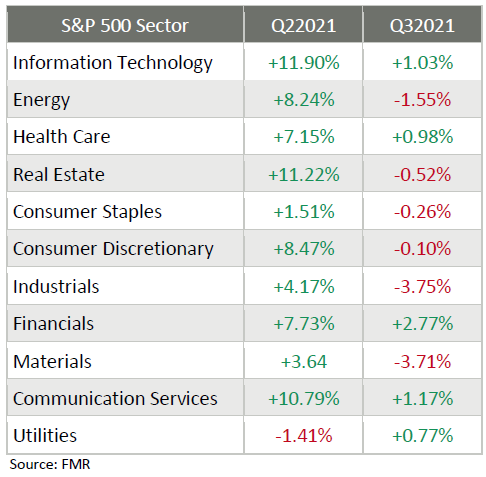 Reviewing the sector returns for just the third quarter of 2021, we saw that:

The second quarter and first six months of 2021 were good for almost all investors, with most of the major asset classes and styles turning in very respectable – and most importantly green – numbers across the board. 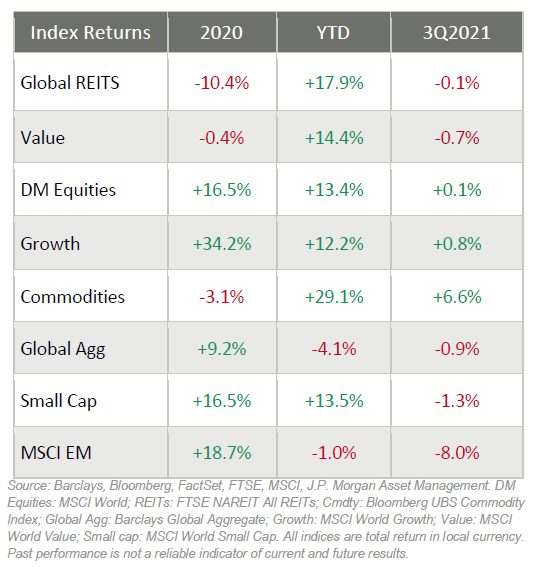 Turning to Commodities, which jumped another 6% for the quarter to add to its almost 30% gain YTD, it should be noted that 14 of the last 17 months have seen gains. Further, that almost 30% gain YTD represents its largest annual gain since 1979.

Natural gas has gone through the roof with a YTD gain of 135% and WTI Crude oil is up 55% YTD. Supply and demand challenges are driving energy prices higher, as the summer driving season saw record-high gasoline demand and supplies were disrupted by hurricane season.

On September 28th, the Conference Board announced that its Consumer Confidence Index declined in September, after declining in both July and August. The Index now stands at 109.3 (1985=100), down from 115.2 in August. And only 19% of consumers think business conditions are good, whereas 25% think conditions are bad.

“Concerns about the state of the economy and short-term growth prospects deepened, while spending intentions for homes, autos, and major appliances all retreated again. Short-term inflation concerns eased somewhat, but remain elevated,” read the press release from the Conference Board. 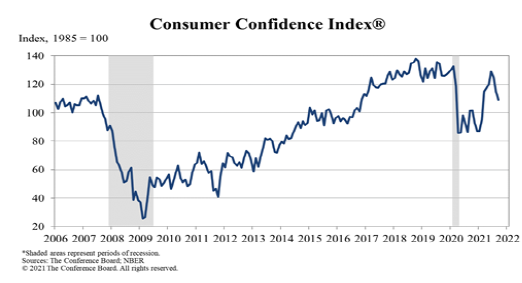 The Bureau of Labor Statistics reported that the Consumer Price Index for All Urban Consumers increased 0.3% in August on a seasonally adjusted basis after rising 0.5% in July. Over the last 12 months, the All Items index increased 5.3%.

Here is some good news on the monthly inflation increases (maybe):

On the last day of the third quarter, the Bureau of Economic Analysis announced that real gross domestic product increased at an annual rate of 6.7% in the second quarter. In the first quarter, real GDP increased 6.3 percent.

The U.S. Bureau of Economic Analysis announced that “the U.S. current account deficit, which reflects the combined balances on trade in goods and services and income flows between U.S. residents and residents of other countries, widened by $0.9 billion, or 0.5%, to $190.3 billion in the second quarter of 2021.

The second quarter deficit was 3.3% of current dollar gross domestic product, down from 3.4% in the first quarter. The $0.9 billion widening of the current account deficit in the second quarter mainly reflected reduced surpluses on services and on primary income that were mostly offset by a reduced deficit on secondary income.” 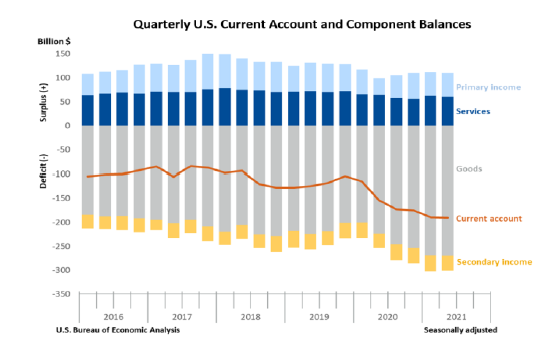 On the last day of the quarter, the Department of Labor announced that for the week ending September 25th, the advance figure for seasonally adjusted initial claims was 362,000, an increase of 11,000 from the previous week's unrevised level of 351,000. In addition:

Exports & Imports of Goods and Services 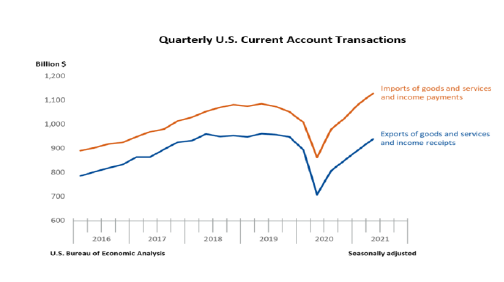 Worries of a Government Shutdown?

On literally the last day of the month with just hours to spare, President Biden signed a bill extending government funding through December 3rd, averting a partial shutdown. But the debt-ceiling fight remains and is likely to dominate Wall Street’s Wall of Worry heading into October.

Here is a very important thing to remember: if the debt ceiling is not raised and the government does shut down, it wouldn’t be the first time. In fact, it wouldn’t even be the twentieth time.

But for perspective, consider the impact to stock markets during the last 2013 and 2018/2019 shutdowns – stocks actually rose. 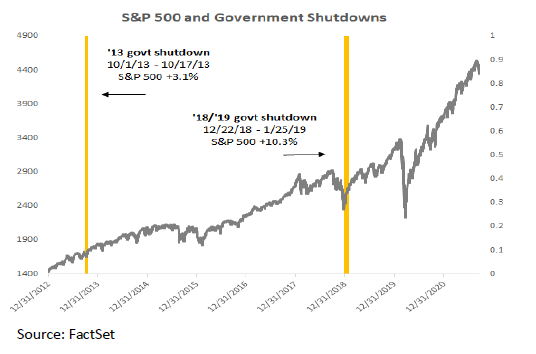 But remember, as always: past performance is never a guarantee of future results.