But it wasn’t just U.S. equity markets that performed poorly this month – developed markets outside the U.S. turned in awful performance too – as all 36 developed markets tracked by MSCI declined and most of them dropped more than 5%.

For the month of January:

The themes that helped drive market performance were similar to the ones that helped drive performance the prior month (and most of last year). But in January these themes seemed to take a back seat to one theme that dominated – the Federal Reserve. Yes, it’s still true that inflation and supply chain issues contributed to the negative vibe, but worries that the Fed would be less accommodative and unwind its balance sheet faster than expected and hike rates faster and more often in 2022, were the biggest driver. By a lot.

Interestingly, stocks jumped on the final day of January, with the S&P 500 leaping 1.9% and NASDAQ soaring 3.4%, but it was not enough to keep the markets from recording their worst monthly performance since March 2020.

Volatility, as measured by the VIX, trended up significantly during the month, starting December in the mid-teens and then doubling to almost 32, before declining to about 24 on the last few trading days of the month.

Investors looking outside the U.S. saw overwhelmingly awful performance, as all 36 developed markets tracked by MSCI were down in January, with 20 of the 36 declining more than 5%.

But performance for emerging markets was mixed, as 14 of the 40 developing markets were positive in January, with 7 jumping more than 5%, including the MSCI Andean index leaping an astonishing 11.8%. 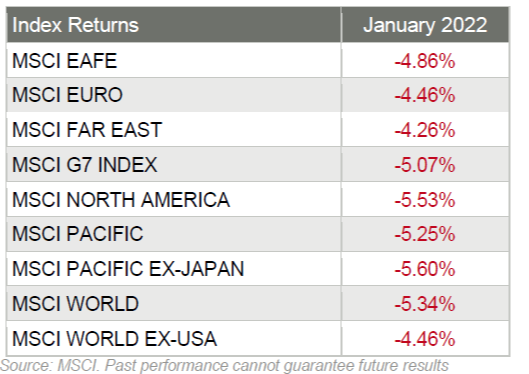 For the month of January, sector performance among the 11 S&P 500 sectors was terrible, as 10 of the 11 were negative, with the Energy sector being the lone hold-out. This is in stark contrast to the final month of 2021, when 10 of the 11 were positive.

In addition, the range in sector-returns was massive, with the Energy sector leaping over 17% and the Consumer Discretionary sector losing over 13%.

And unpacking the various sector returns further, as seemed to be the case most of last year, we can sense another mini-sector rotation in our midst, as the leading sector this month (Energy) was towards the back of the pack last month and the more defensive names (Utilities and Consumer Staples) outperformed the more growth-oriented sectors (Information Technology and Consumer Discretionary).

Here are the sector returns for the month of January December (two very short time-periods): 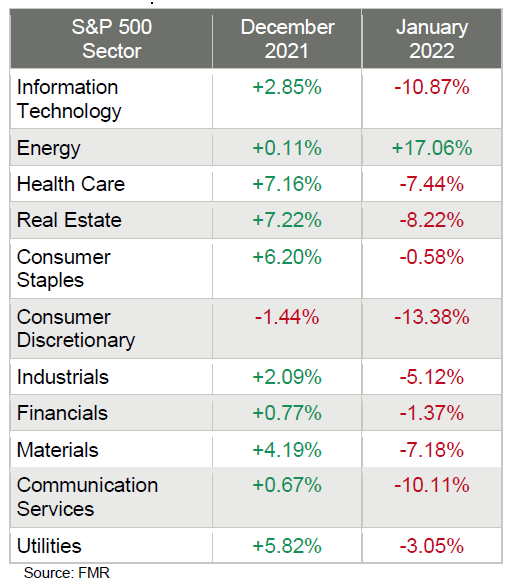 The dominant theme for the month revolved around whether the Fed might need to raise short-term interest rates more quickly and more often, eating into future profits, especially within the high-flying tech names. The Fed’s monetary policy committee did meet during the final week of January and left rates unchanged, as was expected, but Fed Chair Jerome Powell hinted at a possibility of there being more than 3 rate increases this year. And immediately the fed funds futures market started predicting that there would be 5 rate hikes (that’s 1.25%).

The question that all of Wall Street is wrestling with is whether the Fed will raise rates in slower 25-basis- point increments or in faster 50- or even 75-basis-point slugs. As you can see from the chart below, most are expecting a 25-basis-point increase at the Fed’s March meeting. 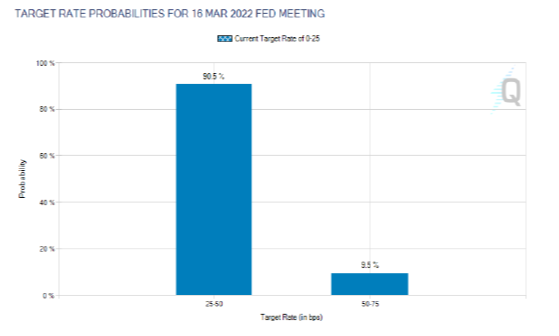 Volatility as measured by the CBOE Volatility Index reached its highest level since the beginning of the pandemic. And January saw a significant increase in volatility, especially toward the end of the month. 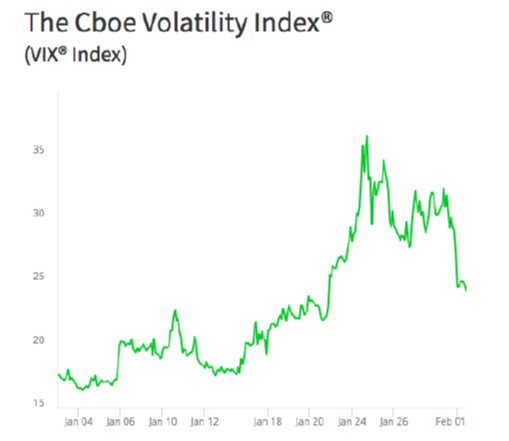 For the entire month of January, the stock market could be described as “tumultuous.” The S&P 500 Index, the DJIA, NASDAQ and Russell 2000 were all off from their recent highs – with NASDAQ entering correction territory and the S&P 500 dipping there too, albeit briefly.

But the market movements on January 24th really summed up the volatility that equity investors experienced well:

On the last Thursday of the month, the Commerce Department announced that real gross domestic product increased at an annual rate of 6.9% in the fourth quarter of 2021, following an increase of 2.3% in the third quarter. Unless something drastically changes (this is just the first estimate of GDP), then last year our economy grew by 5.7%, the fastest pace in almost 40 years.

Government assistance payments in the form of forgivable loans to businesses, grants to state and local governments, and social benefits to households all decreased as provisions of several federal programs expired or tapered off.”

On January 25th, the Conference Board announced that its Consumer Confidence Index declined in January, after an increase in December.

“Consumer confidence moderated in January, following gains in the final three months of 2021. The Present Situation Index improved, suggesting the economy entered the new year on solid footing. However, expectations about short-term growth prospects weakened, pointing to a likely moderation in growth during the first quarter of 2022. Nevertheless, the proportion of consumers planning to purchase homes, automobiles, and major appliances over the next six months all increased. Meanwhile, concerns about inflation declined for the second straight month, but remain elevated after hitting a 13-year high in November 2021. Concerns about the pandemic increased slightly, amid the ongoing Omicron surge. Looking ahead, both confidence and consumer spending may continue to be challenged by rising prices and the ongoing pandemic.” 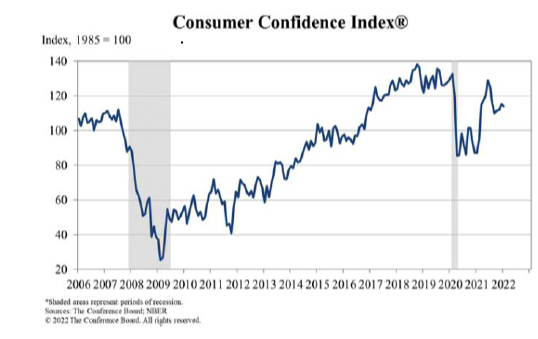 There are a Few Silver Linings

Consumers’ assessment of the labor market was mixed.

But consumers were slightly less positive about their short-term financial prospects.

But Confidence from Home Builders Drops

According to the latest from the National Association of Home Builders: “Growing inflation concerns and ongoing supply chain disruptions snapped a four- month rise in home builder sentiment even as consumer demand remains robust.”

In addition, builder confidence in the market for newly built single-family homes moved one point lower to 83 in January as the HMI has hovered at the 83 or 84 level, the same rate as the spring of 2021, for the past three months. 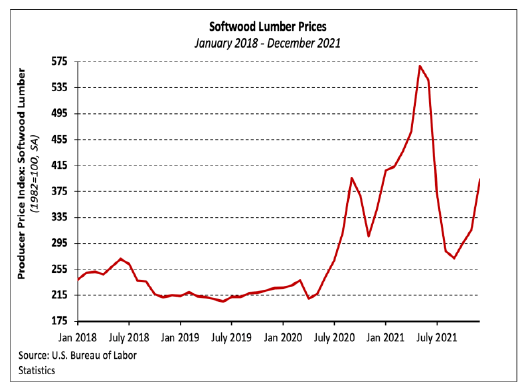 “The HMI data was collected during the first two weeks of January and do not fully reflect the recent jump in mortgage interest rates. While lean existing home inventory and solid buyer demand are supporting the need for new construction, the combination of ongoing increases for building materials, worsening skilled labor shortages and higher mortgage rates point to declines for housing affordability in 2022.”

Towards the end of the month, the Bureau of Labor Statistics reported that the Consumer Price Index for All Urban Consumers (CPI-U) increased 0.5% in December after rising 0.8% in November and increasing 7.0% on the year.

Further: “the index for all items less food and energy rose 0.6% in December following a 0.5% increase in November. This was the sixth time in the last 9 months it has increased at least 0.5%. Along with the indexes for shelter and for used cars and trucks, the indexes for household furnishings and operations, apparel, new vehicles, and medical care all increased in December. As in November, the indexes for motor vehicle insurance and recreation were among the few to decline over the month.

And the Producer Price Index Jumped Too

The Bureau of Labor Statistics also reported that the Producer Price Index for final demand increased 0.2% in December, following advances of 1.0% in November and 0.6% in October.

Final demand prices moved up 9.7% in 2021, the largest calendar-year increase since data were first calculated in 2010. 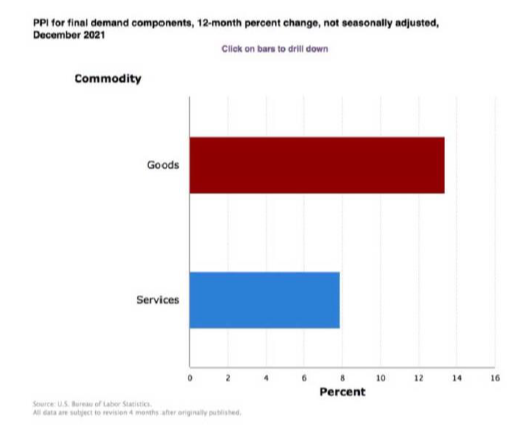 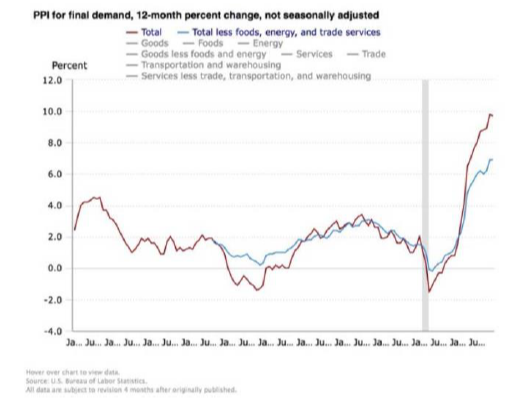 The National Federation of Independent Business released the following on January 11th:

“The NFIB Small Business Optimism increased slightly in December to 98.9, up 0.5 points from November.

Twenty-two percent of small business owners reported that inflation was their single most important problem encountered in operating their business. Price raising activities have reached levels not seen since the early 1980s when prices were rising at double-digit rates.

To underscore the struggles facing small business owners, according to NFIB’s monthly jobs report, 48% of owners reported raising compensation, up four points from November and a 48-year record high reading.