U.S. Markets Down in February

Similar to the month of January, although nowhere near the same degree, U.S. equity markets were down for the month of February, with NASDAQ recording its biggest two-month drop since March 2020.

But it wasn’t just U.S. equity markets that performed poorly this month – developed markets outside the U.S. turned in poor performance too – as 35 of the 36 developed markets tracked by MSCI declined and 4 of them dropped by more than 5%. But performance for emerging markets was mixed, with markets in Eastern Europe suffering significant losses on account of Russia’s invasion of Ukraine.

For the month of February:

The theme that drove market performance was very different from the ones that helped drive performance for the prior months (and most of last year). In February, Wall Street dealt with increasing worries and then the eventual invasion of Ukraine by Russia late in the month.

Volatility spiked, oil prices rose and investors tried to digest what this might mean for equity and fixed- income markets as the invasion added to an already- full plate of market worries that included rising inflation, the Federal Reserve’s timing of rate hikes, and supply chain issues.

Volatility, as measured by the VIX, rose most of the month, starting February in the low-20s and jumping by 1/3 as it ended the month in the low-30s.

West Texas Intermediate crude also rose significantly in February, beginning the month around $88/barrel and ending the month just over $100/barrel. For perspective, at this time last year, the price of a barrel was about $60.

Investors looking outside the U.S. saw overwhelmingly poor performance, as 35 of the 36 developed markets tracked by MSCI were down in January, with most of them losing about 3%.

But performance for emerging markets was mixed, as 25 of the 40 developing markets were negative in February, with many suffering significant losses of over 40% (MSCI EM Europe, MSCI Eastern Europe and MSCI EFM Europe+CIS). 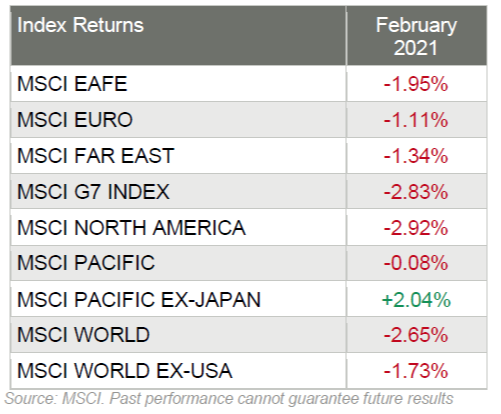 For the month of February, sector performance was mixed, leaning more towards being flat, as 9 of the 11 S&P 500 sectors were green, with 5 of the 9 gaining less than 1%. But given the volatility on the month, the fact that most were green was a statement.

And while two months is not very much to reach any conclusions, it is interesting to see the difference a month can make, as in January we saw 10 of the 11 red, with only the Energy sector gaining that month.

In addition, for February the range in sector-returns was fairly wide, with the Energy sector gaining over 6% and the Communication Services sector losing almost 2%.

Here are the sector returns for the month of February and January (two very short time-periods): 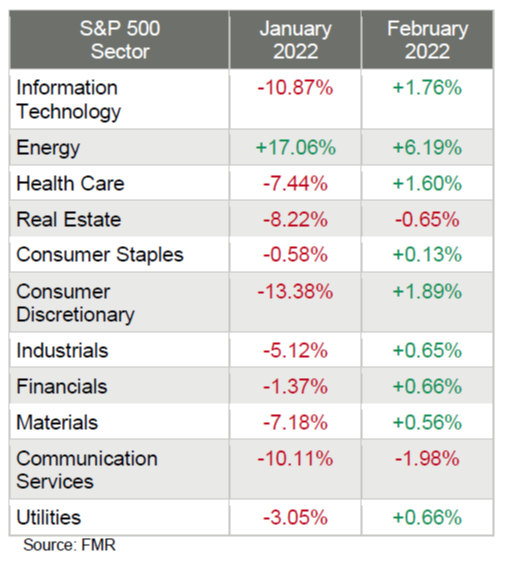 During the last week of the month, worries of a Russian invasion of Ukraine came true and volatility spiked on Thursday the 24th to a 2-year high as markets dropped dramatically, especially the futures markets on Wednesday night.

As news of the attacks and footage of the invasion started hitting social media, the futures market Wednesday night dropped dramatically as did stocks when the bell rang on the NYSE Thursday morning. Investors rushed to safe-assets and drove longer- term Treasury yields lower.

But by the end of the day Thursday, Wall Street reversed course. In fact, on Thursday, NASDAQ saw a daily swing of almost 7%, trading down by almost 4% and then recovering and tacking on a gain of 3.5% for the day.

Not surprisingly, it was the defensive names that outperformed that day, as the Health Care, Real Estate, and Utilities sectors all gained at least 2%.

The other dominant theme this month revolved around whether the Fed might need to raise short- term interest rates more quickly and more often, eating into future profits, especially within the high- flying tech names. Then Russia invaded Ukraine and investors were trying to decipher whether the war would push the Fed into a more dovish stance, rather than risk raising rates too quickly and too far.

Notwithstanding the timing, the fed funds futures market is predicting that there could be 5 rate hikes (that’s 1.25%) this year.

And as you can see from the chart below, the vast majority of Wall Street is expecting a 25-basis-point increase at the Fed’s mid-March meeting.

Volatility as measured by the CBOE Volatility Index reached its highest level since the beginning of the pandemic. And February saw a significant increase in volatility, especially on the day that Russia invaded Ukraine. 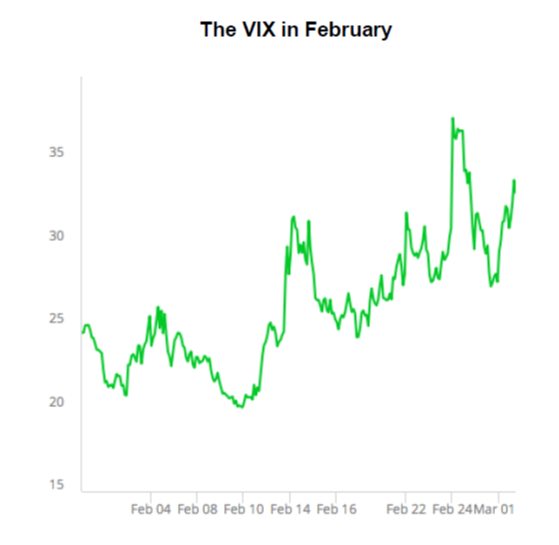 That evening, after stock markets in the U.S. closed, S&P futures pointed to a pretty significant decline the following day, suggesting that markets might drop by 3-4%. And sure enough, U.S. markets opened and proceeded to drop quickly.

Then a curious thing happened: markets rose throughout the day. And when the final bell rung on February 24th, the S&P 500 was up 1.5% and NASDAQ had jumped 3.3%.

But by the time markets closed the books on the month, the S&P 500 was still in correction territory (as was NASDAQ and the Russell 2000 too).

Late in the month, the Bureau of Economic Analysis reported that personal income increased $9.0 billion (less than 0.1%) in January. In addition: 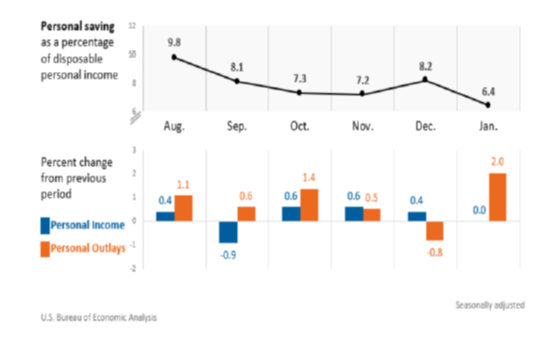 The Census Bureau also reported that new orders for manufactured durable goods in January increased $4.3 billion or 1.6%. This increase, up eight of the last nine months, followed a 1.2% December increase. 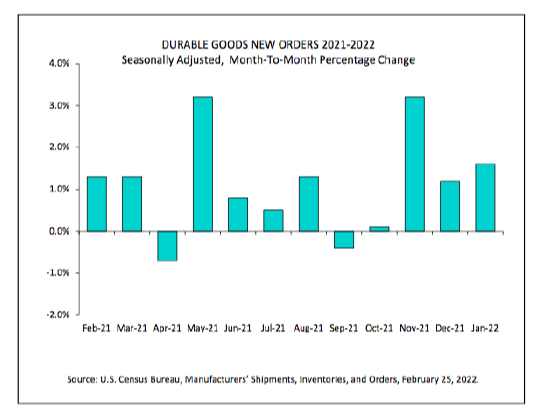 On the last day of the month, the U.S. Census Bureau announced the international trade, wholesale inventories, and retail inventories advance statistics for January 2022 and results were up across the board. 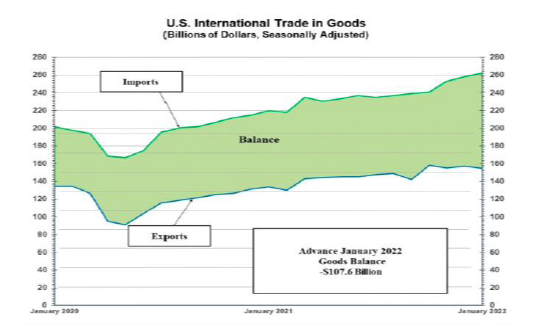 On the 22nd, the Conference Board announced that its Consumer Confidence Index fell in February, after having declined in January too. 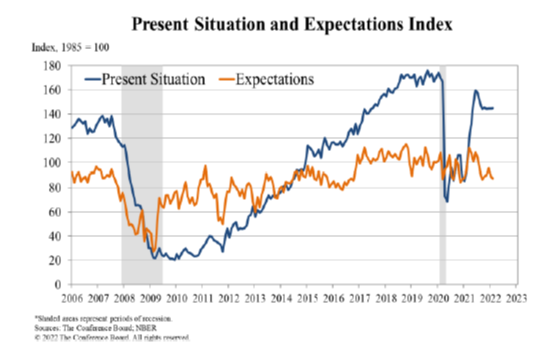 Consumers’ appraisal of current business conditions was mixed in February.

Consumers’ assessment of the labor market was also mixed.

Consumers were less positive about their short- term financial prospects.