Global Equity Markets Mixed in May

Global equity markets were mixed for the month of May, as the larger-caps outperformed the smaller-caps, value stocks outperformed growth stocks, and the blue-chips outpaced the technology-names. And May also saw investors struggling between the competing forces of positive economic news and much-better-than-expected corporate earnings on the one hand and inflation and tax worries on the other.

For the month of May:

So far in 2021, the markets have turned in what can only be described as very good performance, as:

The themes that drove the markets in May were similar to some the themes from April – mostly positive economic data, more government spending talk and greater distribution of COVID vaccines – but new themes emerged as well.

More specifically, we saw better-than-expected corporate earnings and rebounding economic data fighting against inflation fears and worries of higher taxes on the horizon.

Volatility, as measured by the VIX, trended down slightly during May, although it saw a fairly significant spike to over 27.59 mid-month before coming to rest at 16.76.

West Texas Intermediate crude rose in May, ending the month north of $67/barrel, for a monthly gain of more than $3/barrel.

Investors looking outside the U.S. performed very well, as all 35 developed markets tracked by MSCI were positive for the month of May, with the MSCI Europe ex EMU Index leading the way with a monthly gain of over 4%.

And of the the 40 developing markets tracked by MSCI, 34 of those were positive in May too, with 4 of those indices leaping by more than double-digits, led by the MSCI EM Eastern Europe ex Russia Index that jumped 13.77%. 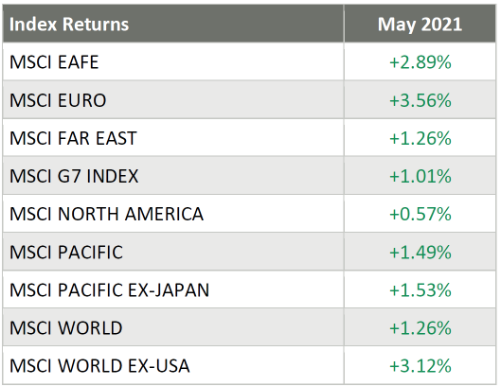 For the month of May, sector performance was mostly positive, as only 3 of the 11 sectors ended the month in the red.

Here are the sector returns for the month of May as well as April (two very short time-periods): 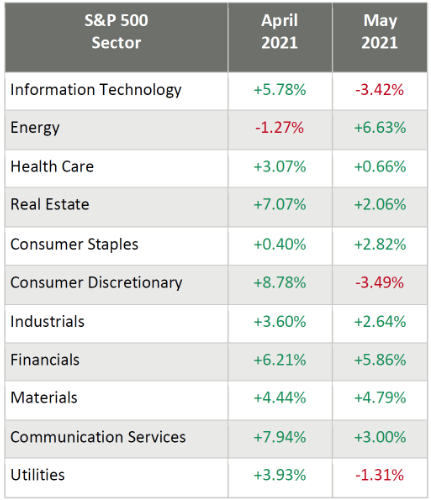 On the second-to-last trading day of the month, the Bureau of Economic Analysis announced that real gross domestic product increased at an annual rate of 6.4% in the first quarter of 2021. For comparison purposes, in the final quarter of last year, real GDP increased 4.3%. 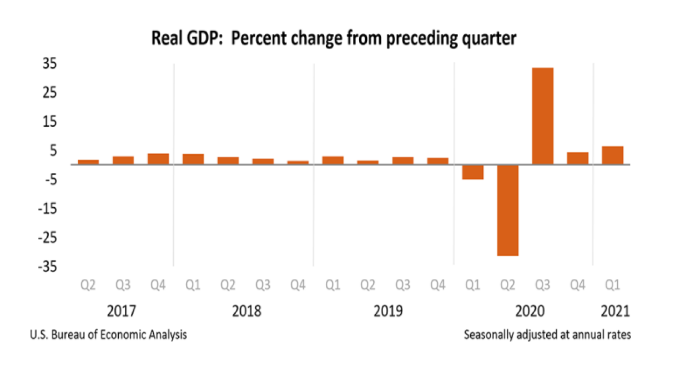 In mid-May, the U.S. Bureau of Labor Statistics reported that monthly and yearly inflation numbers continued to steadily rise.

For the month of April, the Consumer Price Index for All Urban Consumers increased 0.8% after rising 0.6% in March and over the last 12 months, the all items index increased 4.2%. This was the largest 12-month increase since a 4.9% increase for the period ending September 2008.

A few more highlights from the data:

U.S. Inflation Over the Past Year 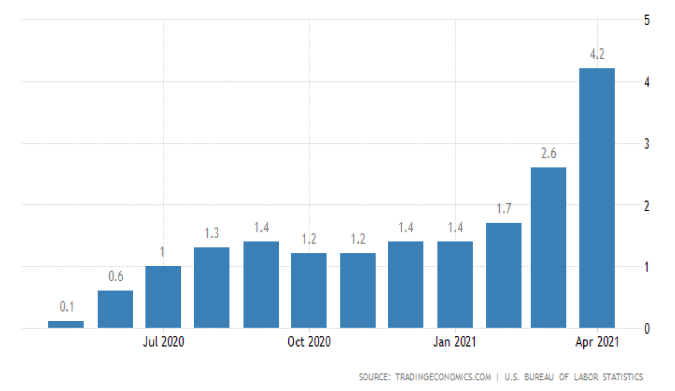 On the last Tuesday of the month, the Conference Board reported that its Consumer Confidence Index held steady in May, which followed a healthy gain in April. From the release:

The U.S. Census Bureau and the U.S. Department of Housing and Urban Development jointly announced that sales of new single‐family houses in April 2021 were at a seasonally adjusted annual rate of 863,000, 5.9% below the March rate.

And to contrast that number with how much COVID impacted new home sales this time last year, consider that April 2021 was a whopping 48.3% above the numbers from April 2020. 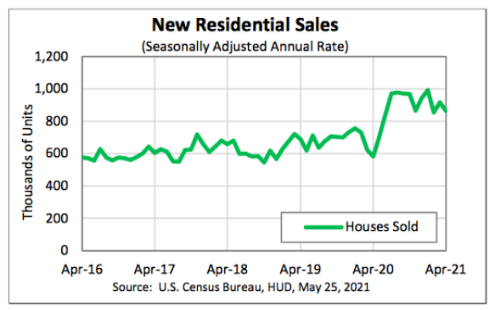 Despite the positive housing sales data from the past year, skeptics are continuing to worry that the housing market might be facing some real headwinds. And as if to underscore those worries, U.S. Secretary of Commerce Gina M. Raimondo released a statement after meeting with senior officers from the National Association of Home Builders that read:

“The residential construction industry is facing serious challenges because of supply chain constraints and the impact on home building, especially with respect to affordable housing. Today was a productive, positive conversation to begin to address these challenges. We take these issues seriously, and my staff and I are committed to continuing to work with all stakeholders, including reviewing relevant data and conducting analysis to identify targeted actions the government or industry can take to address supply chain constraints. I want to thank the NAHB and its leaders for constructive engagement on this issue and working with us to find a path forward.” 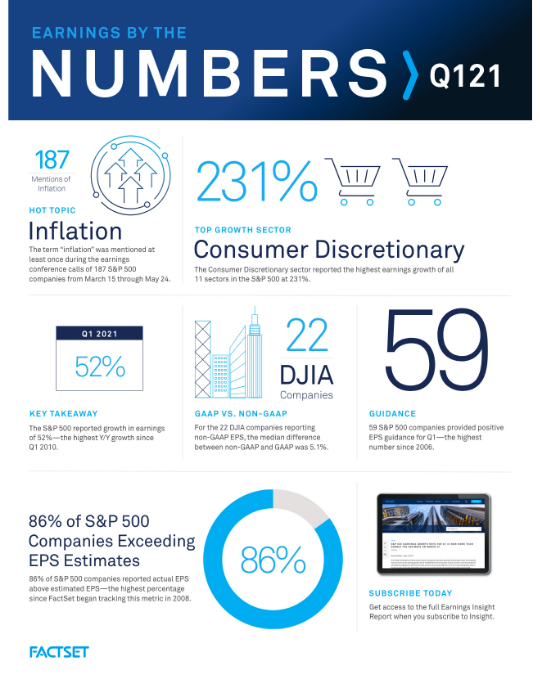