Markets Mostly Up in March

Interestingly, the DJIA’s 6+ percentage-point outperformance relative to NASDAQ represented the biggest monthly spread between the two indices since February 2002, according to Dow Jones Market Data.

It is especially notable that the DJIA, which has existed for almost 125 years, has outpaced NASDAQ by this much in a month only 19 other times since the NASDAQ index was launched. And that was 1971. 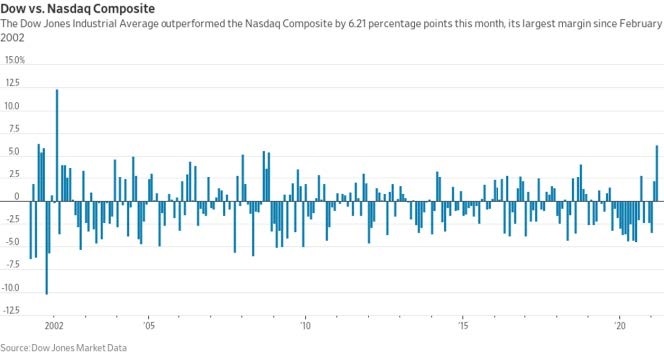 Volatility, as measured by the VIX, trended down throughout the month, beginning around 23 and consistently moving south to end the month at 18.

West Texas Intermediate crude spiked at the beginning of the month, jumping $6/barrel to a high of $66, but mid-month it slid the other way and ended mostly where it started, right around $60/barrel. 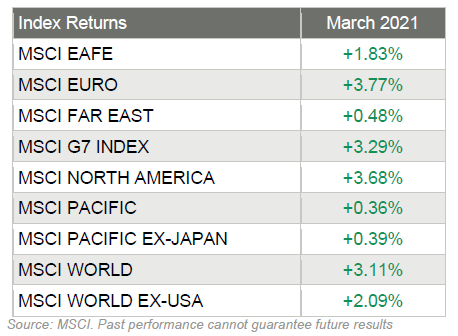 Sector Performance Was Positive in March

For the month of March, sector performance was positive, but there were some big ranges in the returns not seen in some time. The good news is that of the 11 S&P 500 sectors, all of them ended the month green.

The better news (maybe) was that a few of the harder-hit sectors turned in very robust monthly performance, especially the Utilities sector (up over 10%) and the Materials sector (up over 7%). But in what appears to be a sector rotation of sorts, the best performing sector was Utilities (+10.13%) whereas the worst performer was Information Technology (+1.64%). And that’s a very big difference.

Here are the sector returns for the month of March as well as February (two very short time-periods): 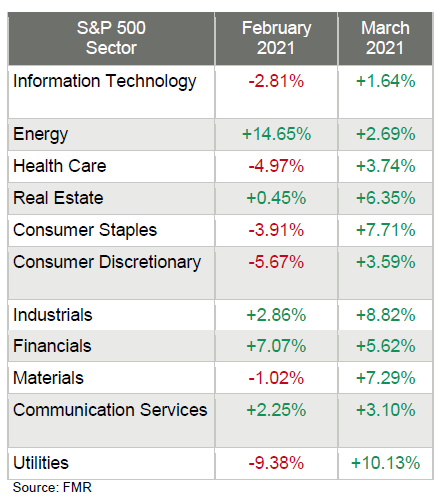 Reviewing the sector returns for just the month of March, which again is a very short time period, we saw that:
• All 11 sectors were painted green for the month of March.
• The Energy sector was once again positive for the month, helped by rising oil prices and by expectations of a shift in energy policies from the Biden administration.
• More than half of the S&P 500 sectors were up more than 5% on the month and that’s impressive.

On Thursday, March 25th, the Bureau of Economic Analysis announced that Real Gross Domestic Product increased at an annual rate of 4.3% in the last quarter of 2020. This is after an increase of 33.4% in the third quarter of last year, which should be viewed from the context of how much GDP declined in the middle of 2020 during the worst of the shutdowns due to COVID.

Late in the month, the National Association of Realtors reported that for the month of February, Existing Home Sales dropped 6.6% from January after two months of gains. The good news (if you are selling) is that sales are still 9.1% higher than last year and that existing-home prices are significantly higher than a year ago – even surpassing pre-pandemic levels.

Other highlights from the NAR include:
• The median existing-home price for all housing types in February was $313,000, up 15.8% from February 2020 ($270,400), as prices rose in every region.
• February's national price jump marks 108 straight months of year-over-year gains.
• As of the end of February, housing inventory remained at a record-low of 1.03 million units, down by 29.5% year-over-year – a record decline.
• Properties typically remained on the market for 20 days in February, down from both 21 days in January and from 36 days in February 2020.
• Seventy-four percent of the homes sold in February 2021 were on the market for less than a month.

According to the NAR, home affordability is weakening and this is unlikely to change given tight inventories. Further, if inventory remains tight, affordability will decline further if mortgage rates trend higher. And according to Freddie Mac, the average commitment rate for a 30-year, conventional, fixed-rate mortgage was 2.81% in February, up from 2.74% in January.

Hoping for a Good April Run?