Global equity markets were mixed for the month of June, as the larger-caps outperformed the smaller-caps, growth/technology stocks trounced the value names and the mega-caps barely moved. And June also saw investors continuing to struggle between the competing forces of mostly positive economic news on the one hand and inflation worries on the other.

For the month of June:

So far in 2021, the markets have turned in what can only be described as very good performance, as:

Volatility, as measured by the VIX, trended down again in June, starting slightly under 18 and ending the month at 15.47.

West Texas Intermediate crude rose again in June, ending the month north of $75/barrel, for a monthly gain of more than $8/barrel, a level not seen since 2018. Further, WTI has climbed more than 50% on the year, having started 2021 at about $48/barrel. 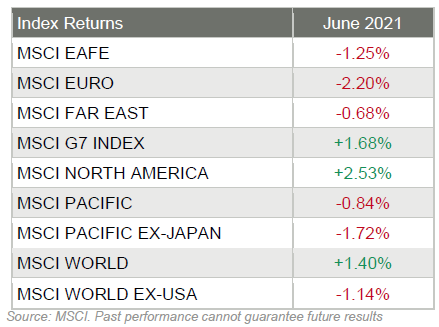 For the month of June, sector performance was mixed, as only 5 of the 11 sectors ended the month in the red, which is slightly worse than what we saw in May when only 3 were red.

But as has been the case for some time, the range in sector-returns was wide, with Information Technology up almost 7% and Materials down more than 5%. And looking under the hood of sector returns, we can see another sector rotation emerging, as Information Technology moved to the front of the pack for the month, after bringing up the rear in May.

In addition, last month’s winners (Financials and Materials specifically) were among this month’s losers. And the Utilities sector was the only sector keeping its trend intact from the previous month, but it’s not a good trend as both May and June were negative.

Here are the sector returns for the month of June as well as May (two very short time-periods): 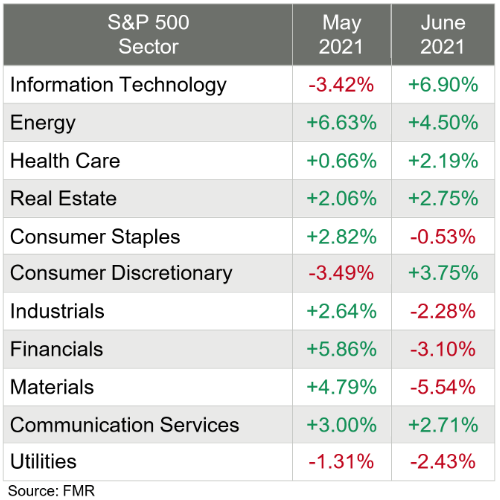 One-third of the way into the month, the U.S. Bureau of Labor Statistics announced that the Consumer Price Index increased 0.6% in May after rising 0.8% in April.

But maybe more importantly, the BLS reported that the overall inflation rate rose to 5% this past year, which is the largest 12-month increase since a 5.4% increase for the period ending August 2008. But that 5% annual inflation figure masks a huge range among the individual components of inflation, as:

Then 5 days after the U.S. Bureau of Labor Statistics published CPI data, Wall Street received the Producer Price Index, which calculates and represents the average movement in selling prices from domestic production over time (the PPI is different from the CPI in that it measures costs from the viewpoint of industries that make products, whereas the CPI measure prices from the perspective of consumers).

A few days before the official start of summer on June 21st, Wall Street’s eyes and ears were on the Federal Reserve, and as expected, the FOMC made no changes to the fed funds rate or the pace of asset purchases.

But what was surprising, at least to some, was that the Fed seemed to signal two rate hikes by the end of 2023. Prior to this week’s meeting, expectations were for no rate hikes through 2023 and one or two rate hikes in 2024.

But even more troubling to those who want rates kept low is that seven members of the FOMC indicated that they expected a rate hike next year.

Federal Reserve Chair Jerome Powell seemed accommodative in his remarks following the FOMC policy statement, but it was St. Louis Fed President Bullard who sounded more hawkish in an interview when he acknowledged that he was one of the seven calling for a rate hike next year. 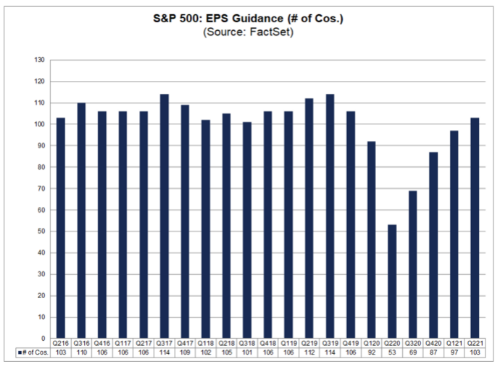 Late in the month, the National Association of Realtors announced that existing-home sales decreased for a fourth straight month in May. Further, only one major U.S. region recorded a month-over- month increase, while the other three regions saw sales decline. However, each of the four areas again registered double-digit year-over-year gains, which is not surprising given the state of the real estate market and the economy in general this time last year.

According to the release from the NAR, total existing- home sales – completed transactions that include single-family homes, townhomes, condominiums, and co-ops – dropped 0.9% from April to an annual rate of 5.80 million in May. But sales in total were up a stunning 44.6% from just one year ago (May 2020).

The NAR further reported that:

For the second straight month, only the Midwest experienced higher sales from the prior month.

Also late in the month, the Conference Board announced that its Consumer Confidence improved in June, following gains in each of the previous four months. The Index now stands at 127.3 (1985=100), up from 120.0 in May. 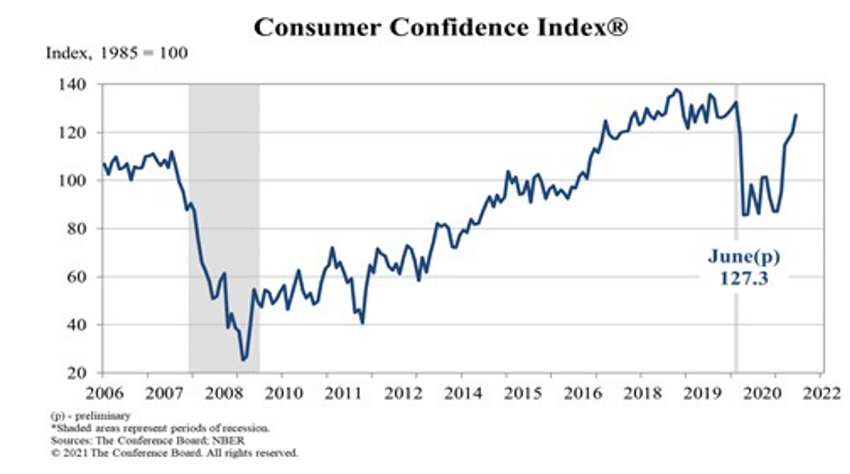 Optimism about the short-term business conditions: