Global equity markets were mostly up in April, but while U.S. equity markets continued to reach new highs, Wall Street seemed to be battling the forces of positive economic news and rising earnings on the one hand and inflation and tax worries on the other.

For the month of April:

So far in 2021, the markets have turned in what can only be described as spectacular performance, as:

The themes that drove the markets in April were similar to some more recent themes – mostly positive economic data, more government stimulus and distribution of COVID vaccines – but new themes emerged as well. More specifically, there seems to be better-than-expected corporate earnings and rebounding economic data fighting against inflation fears and worries of higher taxes on the horizon.

Volatility, as measured by the VIX, trended down slightly during the first half of the month and then rose steadily to end the month at 18, slightly higher than where it started the month.

West Texas Intermediate crude dipped slightly at the beginning of April, but mostly marched higher, ending the month north of $63/barrel, for a $2 monthly gain.

Investors looking outside our borders performed very well, as 34 of the 35 developed markets tracked by MSCI were positive for the month of April, with only MSC Far East retreating slightly. And of those 35 developed markets, MSCI North America led the way with a gain of more than 5% on the month. 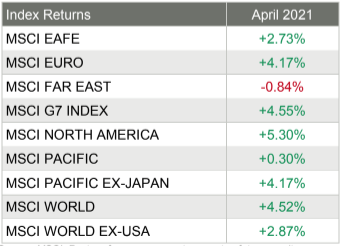 Interestingly, of the 40 developing markets tracked by MSCI, 37 of those were positive in April too, with three of those indices leaping more than 5%.

Sector Performance Was Positive in April

For the month of April, sector performance was overwhelmingly positive, with only the Energy sector ending the month in the red. And while the ranges in the returns were wide, 5 of the 11 sectors were up  more than 5%, led by the Consumer Discretionary sector’s gain of almost 9% in a month.

Further, while last month appeared to signal a sector rotation of sorts, with the best performing sector being Utilities (+10.13%) and the worst performer being Information Technology (+1.64%), April seemed to rotate yet again.

Here are the sector returns for the month of April as well as March (two very short time-periods): 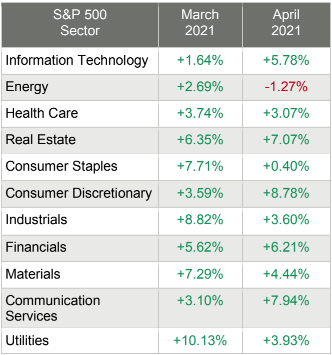 On the second to last trading day of April, the Bureau of Economic Analysis reported that real gross domestic product increased at an annual rate of 6.4% in the first quarter of 2021. For perspective, in the fourth quarter of 2020, real GDP increased 4.3%.

According to the BEA:

“The increase in real GDP in the first quarter reflected increases in personal consumption expenditures (PCE), nonresidential fixed investment, federal government spending, residential fixed investment, and state and local government spending that were partly offset by decreases in private inventory investment and exports. Imports, which are a subtraction in the calculation of GDP, increased.”

But economics were quick to pounce on this disclaimer too:

“The increase in first quarter GDP reflected the continued economic recovery, reopening of establishments, and continued government response related to the COVID-19 pandemic. In the first quarter, government assistance payments, such as direct economic impact payments, expanded unemployment benefits, and Paycheck Protection  Program loans, were distributed to households and  businesses through the Coronavirus Response and Relief Supplemental Appropriations Act and the American Rescue Plan Act. The full economic effects of the COVID-19 pandemic cannot be quantified in the GDP estimate for the first quarter of 2021 because the impacts are generally embedded in source data and cannot be separately identified.”

The Conference Board reported that its Consumer Confidence Index rose significantly in April, which is on the heels of another significant gain the month before. More specifically:

As a result, the S&P 500 is now reporting the highest year-over-year growth in earnings since Q1 2010 for Q1. Further, analysts also expect double-digit earnings growth for the remaining three quarters of 2021. 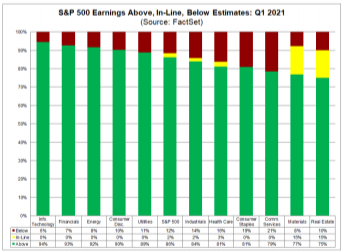 According to research firm FactSet:

Revenues Higher Than Expected Too

“In terms of revenues, 78% of S&P 500 companies have reported actual revenues above estimates, which is above the five-year average of 64%. If 78% is the final percentage for the quarter, it will tie the mark (with Q4 2017) for the second-highest percentage of S&P 500 companies reporting a positive revenue surprise since FactSet began tracking this metric in 2008.

In aggregate, companies are reporting revenues that are 3.7% above the estimates, which is above the five-year average of 1.0%. If 3.7% is the final percentage for the quarter, it will mark the largest revenue surprise percentage reported by the index since FactSet began tracking this metric in 2008.”

Remember the hypothesis that claims that equities tend to underperform in the six months from May through October? It suggests that equity investors should sell stocks at the beginning of May and then jump back into the market in the fall. And the catchy tagline is “Sell in May & Go Away.”

Two things when considering following that advice. First: it hasn’t worked for a long time. 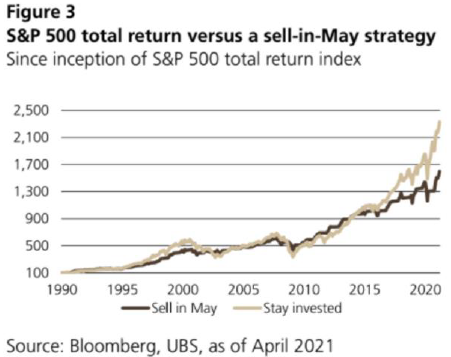